I bet most of us think of plants merely as passive organisms that grow almost unperceptively. What some people don’t know is that these life forms are actually active and dynamic in ways that are sort of not so obvious to the casual observer. In fact, plants tend to influence the chemistry of the garden soil and even affect the types of microorganisms that thrive there. While some poison their neighboring crop’s offspring to keep that needed competitive advantage, others change its ecosystem in ways that benefit other surrounding species. Aside from that, plants in general actively compete with other undergrowths for space. They also wage constant war with insects often relying immensely on chemical combat.

Note that companion planting is actually little more than the known general belief that some plants can benefit others when established in close proximity. Companion planting is basically defined as the process of planting two or more plants species in near proximity with the purpose of deriving certain cultural benefits like higher yield or pest control. Scientifically speaking, this refers to the process of embracing various strategies that help increase an agricultural ecosystem’s biodiversity which in layman’s terms, is simply about two plants helping each other out one way or another. The benefits of companion planting include providing shelter by protecting other plants from too much sun or from wind, giving physical support for others, attracting beneficial insects like bees that spread pollen, promoting soil improvement, and making possible for decoy plants to protect other vegetation.

Companion planting is particularly well-adapted to small gardens where space is at a premium and plants are generally established in close proximity. It is also commonly used by organic gardeners since this approach is often intended for pest control. Natural candidates for companion planting are gardens that use wide rows or raised beds. If the long lists or compatible vegetable charts you have found at various other websites left you quite dizzy, you can instead try to focus on some of this approach’s basic principles.

You can look on wikipedia for a great list of companion plants that do well together.

If you are after a more attractive garden and want to use flowers to companion plant with your vegetables, then you can go here to download our attractive Companion Planting Guide for flowers, which you can print out and put on your wall. 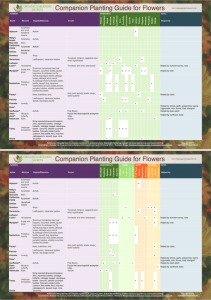